Have classical music on XM radio right now. Will switch to The Clash about half way.
Posted by Fred at 3:16 PM 1 comment:

Heading home. Finally. That took longer than expected.
Stopping for food first
Posted by Fred at 3:05 PM No comments:

We're probably heading home today and as helpful as everyone has been, it will be nice to not have people coming in and waterboarding us to find out if we changed his diaper, what was in it, what time it was, did we feed him, how long, which side, how much.

Massively sleep deprived, we've resorted to telling them what they want to hear and we also gave up the secret location of the diaper "archives" (under the sink, in the corner).

Don't call us today.  We are sleepy.  The times of opportunity are randomly scattered and we could get sleep almost without notice.  A single phone call will send us into a psychosis.

Something must be going off inside that little head.  Synapses forming and neurons firing.  Francisco, like all babies I am guessing, makes faces when he sleeps.  Somewhat entertaining in general but that's likely only going to remain entertaining if you are a blood relative.  (There is probably some Inverse-Squared law that governs how much mundane baby stuff is entertaining.  I'm guessing a baby's cuteness/entertainment factor has an inverse relationship relative to your genetic distance from said infant.)

So entertaining moments aside, apparently Cisco had a dream where he was being chased by formula bottles and a huge Simulac monster.  I say this because he was sleeping soundly then wakes from a dead sleep and screams like a lunatic for just long enough for Barb and I to look at each other and think, "Oh hell.  Here we go." As those thoughts are being formed and read on each other's faces, he sighs and is right back to dream land.   That was unexpected.   Granted, there are a lot of things people don't tell you or can't possibly describe when it comes to having a newborn.  You would think that this would be a great misery-loves-company moment someone would pass on.   As in "Oh yeah, wait till he has a 5 second nightmare on his 4th day of life." 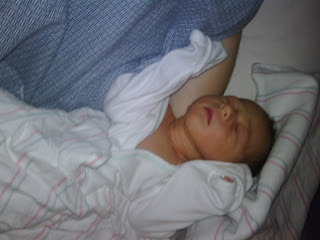 If you make a sudden surprising move, his limbs stiffen up and he falls over in this position.

OK, that's not true, this is just what he looks like when he's not having a nightmare. 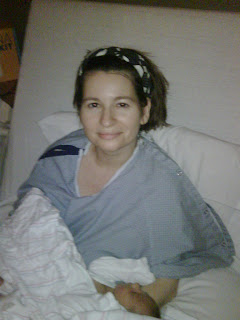 Here's Barb as well with her Punisher headband.   Love that girl.
Posted by Fred at 12:28 AM No comments:

So the thing I continue to find strange about this experience is how time is affected.   Just a minute ago it was 5pm and I had two hours to get to the cafeteria before they close.  I head down there and when I get there it's past 7 pm.

We've been here since Monday night.  It will be two days tonight.  Seems like a week and a half. 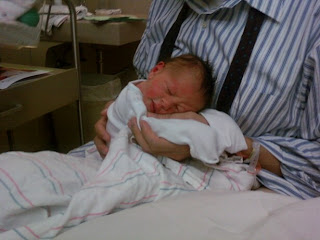 So when this guy decides to sleep, he's sleeping.   Had him sitting up to pat his back after he ate and he just decided he liked it there. 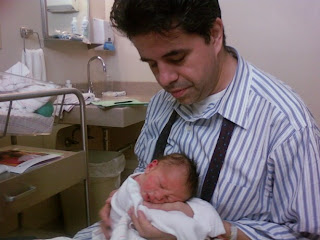 My father was right. At 6 pounds 11oz Francisco Sebastian Santa Cruz Chavez was born at 12:03 am today
Its a boy! He's got good hair and is crying. Cool dude.
Barb did a good job and I'm going to follow the him to the nursery.
Posted by Fred at 12:19 AM 4 comments:

OK I've been summoned. I'm entering the chamber of baby emancipation.
Posted by Fred at 11:56 PM No comments:

Dr just scrubbed up and went in. More Kenny G.
Posted by Fred at 11:52 PM No comments:

This is like a 24/7 Kenny G station. Isn't this music banned in most civilized countries?
Posted by Fred at 11:43 PM No comments:

They sat me in a chair outside the room and said they'll call me when they are ready. Weird experience to listen to the adult soft jazz light radio station while waiting. Is this supposed to be soothing?

Also the shoe covers are odd.

Dr mcclusky just arrived. She will do the C-section. We will name the baby McClusky Chavez.
Posted by Fred at 11:21 PM No comments:

Nurse showed up. Tess. We will name the baby Tess.

Headband update. The headband is actually a Punisher scarf, not just a regular skull scarf.

We are watching Seinfeld. One that we actually hadn't seen before. We've decided to name the baby Jerry.
Posted by Fred at 11:15 PM No comments:

First IV bag empty. Need two in before procedure.
Posted by Fred at 10:59 PM No comments:

About another hour to go before anything happens.
Posted by Fred at 10:11 PM No comments:

Anesthesiologist is here. His name is William. We will name the baby William.
Posted by Fred at 10:08 PM No comments:

Her nurse is named Carmen. So we're naming the baby Carmen.
Posted by Fred at 10:04 PM No comments:

Consent forms signed. I need to eat. Barb doesn't get to but it is what it is.
Posted by Fred at 10:01 PM No comments:

Ultrasound lady on here now. Kinda freaked Barb out when she asked when her due date is. Barb looks at her, "Uhm well it was the 27th."

The look on Barb's face was great.

So here's the story for those who may not know.

She had ultrasound scheduled today to check the amniotic fluid. There was a concern it might be low and they would have to do a C-section. So she doesn't eat in the morning and goes in this afternoon. Fluid level good everyone good and no need for emergency C-section.

So she leaves around three and is so hungry she stops at Arbys and gets a Beef N Cheddar. C-section scheduled for friday.

Now that there will be a C-section, they want to wait until 8 hours have passed.

So now I've got at least two hours before anything happens.

So they check things out and sure enough, water broke. Baby will be here tonight.
Posted by Fred at 9:00 PM No comments:

Ok so there is news. About six thirty Barb's water broke. Well the thought it may be.
Posted by Fred at 8:58 PM No comments:

This is going to be the best way to update everyone on the whole baby thing.
Posted by Fred at 8:23 PM No comments:

I don't normally discuss "Things Politic" here on Things Chavez but I am getting tired of all the misrepresentation on both sides of this issue.   The thing, however, that sickens me the most is this claim of increased racial profiling and civil rights abuses.  This argument is wholly and solely based on an offensive assumption of corrupt law enforcement.

Yes, there are bad people in all fields but the overwhelming majority of police, Sherriff’s officers, border patrol, FBI and so on, are decent regular people who will not use this as an excuse to attack Hispanics.
If you believe law enforcement is so corrupt then you should be opposed to just about any law as they can all be used unlawfully against illegal aliens, rednecks, teens, women, Asians, the sinistral, or dentists.

The hyperbolic concern with the "bad cop" who violates the law is unwarranted. Address the issue. The answer is not to object to laws that can be misused. Objecting to the law on the grounds of possible abuse is like objecting to hot dogs because someone could choke on them.

Laws are not constructive. They are punitive vehicles. Occasionally acting as a deterrent and mostly providing a way for society to rid themselves of undesirable elements whether they are child molesters, murders, chemical waste or illegal immigrants. I'm OK with that.

If you don't believe it should be illegal to enter the United States without the current processing steps, I'm OK with that as well. Get the votes. Change the law. The current Arizona law does not make it more illegal to be an illegal immigrant. It allows the state to take an active role in the enforcement of the Federal Laws that exist already. Change those laws if you like. Just stop whining about it in the meantime.

It's Time My Friends... Monaco

The race in Spain stays mainly with Australian.

Last race was interesting for two reasons.
The Brawn Team redesigned their car to better fit his driving style and he out qualified his team mate for the first time this year and finished 4th.
Secondly, the combined psychic power of the spanish people forced Lewis Hamilton off the track and nearly exploded Vettel's brakes, giving Alonso second place.

Absolutely one of my favorite tracks.  Not so much for the racing, as there is little passing and actual racing going on.
But for lack of a better word, the event itself.  They (who wrote the book of "it")** refer to the Formula One Grand Prix de Monaco as the Crown Jewel of Formula One.  A rather insightful metaphor as, much like any remaining monarchy, the track is fat with anachronism.

The only driver to have won this race 6 times, Ayrton Senna.
The first turn of the first lap is always a good time.

We're watching it today.   I know this is short notice but sometimes that's just how it works out.

** Atributed to Mike Gilbert expressing disdain for those who argue with only talking-point knowledge of the subject instead of actual knowledge.  At least that's my interpretation.
Posted by Fred at 8:37 AM No comments: