As I approached my USAirways departure gate in Phoenix on my way to Jacksonville yesterday afternoon I recognized Richard Hammond.   Yes, the Richard Hammond from Top Gear.  He was sterotypically polite and I (not being a believer in the philosophy that their choice to be a celebrity, is a tacit agreement allowing them no privacy whatsoever) didn't want to bother him.  He made his way from what could only be described as an entourage of Snoop Dog proportions.  Five or six large men (bodygards I assume), an assitant (on the phone the entire time), a photographer, some dude with an iPod dock w/iPod (ala Flavor Flav) in charge of music and what looked like the lead singer of Midnight Oil.

While I believe in respecting Mr. Hammond's privacy, I have no such beliefs about his entourage. 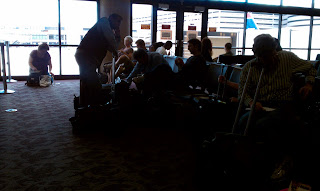 OK so it wasn't quite as elaborate I led you to believe, but there was definitely people hanging out and they know Richard Hammond.

Either way, I said hello, expressed the immense immeasureable joy that Top Gear brings to us in the US and he expressed how incredibly kind I was and proceeded to Burger King to order a Whopper.
Posted by Fred at 1:33 PM