Many people were disapointed in Bahrain and complained about how boring it was.   I didn't find it as excruciating as many others out there but it wasn't the best race I'd ever seen.   There wasn't much complaining after the Australian race.

Collisions, passing, and drama
The start had Massa getting an excellent start moving from 4th to 2nd before the first turn and when Jenson Button bumped into Alonso** and caused him to spin, Poland's finest drove around the commotion and ended up 4th at the end of lap 1.

Photo totally used without permision from a great site.
GP Update.
Excellent coverage.  Go visit them to assuage my guilt.
(**Warning**  They already know who won Malaysia)
Moments later Kobayashi's Sauber, who's front wing had already been replaced at least twice before the race, dropped the front wing in the braking zone for turn 6.   As the wing fell off it wedged itself under the front right tire effectively turning it into a ski plate.   The lack of downforce which would normally help the tires with their mechanical grip and the loss of braking and steering at one wheel caused the Sauber to head straight through the left right combo and drive over Nico Hulkenburg's Williams.   Sebastian Buemi was also caught up in the crash.

Generally likeable good dude Vettel was again leading from pole and easily pulling away when his front left brake exploded and his Red Bull, after careful consideration of its options, decided it liked the option "straight" and there was no point in going on about it.   Again, reliability problems plague Vettel.

The wet track meant the race was started on intermediate tires and when Jenson Button decided he should come in to change to slicks (the soft version), we thought he made a mistake.  He slid off the track a bit later but managed to keep it together and continue.   This was lap 6.   There are some that would call this genius.   This was not genius, it was carefully calculated risk that could have gone disasterously wrong.    What is genious is Jenson's mastery of tire conservation because nobody expected soft high-wear tires mounted 10 minutes into an hour and a half event to last.  This really was amazing stuff and is why Jenson won.   Changing to slicks got him the lead.  His driving won the race.

And let's not take anything away from our lanky Polish friend (who was single handedly responsible for my father in-law watching a formula one race).  Kubica also managed to drive on a single tire change early in the race and although he wanted to pit, he kept it out and drove a great race.

Alonso from 2nd to last to 4th.  Massa 3rd. Kubica 2nd and Button takes the win.

**Yes, I know how unsportsmanlike it was for Jenson to have the audacity to stay on track. He could clearly see that Alonso's car was moving into the space he occupied.  He should have just driven off into the grass as per a little known rule in the F1 Sporting Regulations, Section 4 Sub 3.1 "Face Ferme"
"Drivers must shave cleanly no sooner than Parc Ferme and no later than the Formation Lap. Although drivers are not subject to sanctions for violation, "Recently Shipwrecked" is not a look that we, The Fédération Internationale de l'Automobile, can really get behind. As such, any driver found in violation shall yeild position to Fernando Alonso."
This rule is known as the "You can't make up for your girly eyebrows with that mange-riddled scruff you call a 'beard' rule" or more commonly, "The Groucho Marx Clause".

Next up the Petronas Maylasian Grand Prix.
This 3.4 mile track has the lads racing for a total of 193 miles and is shaped in the sacred form of the humpbacked dove. 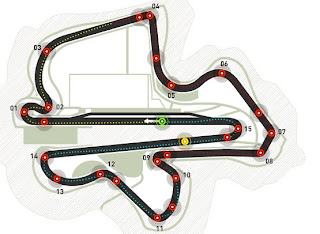 OK so I made up that sacred dove thing but it does kind of look like that.

This circuit has two long straight sections seperated by a hairpin turn.   This is what makes the car set up a challenge.   Set your car up to favor those straights and you are going to have trouble everywhere else.  Set it up to handle the curves well and you will be super slow in the straights.  The track is very wide and with the new car configurations we may see some great passing.

Last year Button won on a race that was delayed due to rain and then halted because it was too dark to continue.   While it was cool to see the "half-points" rule, it did not make for a very entertaining race.

I'm not sure when we'll be watching it but the invites will go out shortly.
Posted by Fred at 10:26 AM